Why I Have Insomnia 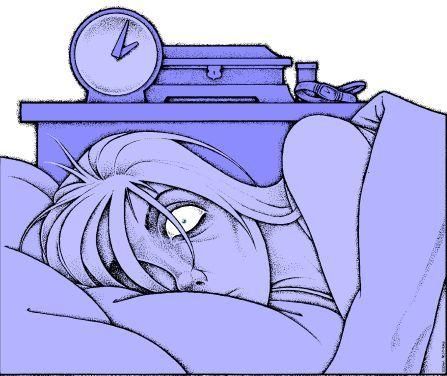 Today was one of those days I suppose. Hell, the last few weeks have been like that. While I managed to stay above water and positive, a sudden rush of “WHAT THE FUCK!” hit me.

Last night, I went to bed with a shit ton of things on my mind and woke up feeling slightly overwhelmed. I hit the snooze button 5 times so literally the last thing I wanted to do was get outta bed. I kept pondering that I had so much to do and that despite advancing 2 steps forward, I seem to always get knocked back 4. As soon as I got handle on one thing and manage to kept my ship from sinking, another leak sprung and there I felt like I was going down. I even started dwelling on the regret of not finishing the tasks I set out: from especially my writing quota, getting school supplies, finishing these fitness certifications, homeowner courses online, trimming the weeds, and on and on and on it went. I even looked at the fact that I needed to take my car to get service meet a writing as well as a work deadline… Did I mention that I also put on like 5 lbs and the damn ceiling had a leak after a monsoon of rain that would not finish this week.

I was starting that downward spiral that led only to giving up.

I began letting my thoughts control me & get the best of me but just as I could further let my thoughts of self-pity get to me…I heard a voice in my head. It said: “Just breath” And so I counted to 5 and got up! That’s right bitches I looked myself in the mirror and said to myself, “Quitters never win & Winners never quit!”

As soon as I got myself together, I went to the gym. I had a fucking job to do and a legacy to complete. I wasn’t doing this for myself so I wasn’t going to sit there feeling sorry for myself.

I started thinking about the things I did have control over and less about the things I didn’t. Not to say I ignored them but I had to shift my focus on the immediate goals I had previously laid out for myself. I realized that I had let all of the tasks that lie ahead me cloud my vision and scare me a little instead of appreciating how far I had come. That feeling was all to familiar and it was the kind of thing that makes us give up all together. I mean I had made some baby-step milestone but they were not to be overshadowed. Now I don’t want to seem like I lack accountability or am making excuses because there’s a big differences between that shit and taking pride in finishing a battle within the war.

Once I got to the gym, I noticed that my normal core workout wasn’t straining or hard. In fact I increased my reps. I later measured myself and noticed that I had not gotten bigger. Maybe muscle gain and water retaining lead to the shift on the scale. Nonetheless I remembered what I told my friends, that the scale is not a sure way to manage fitness. It is not the end all be all of getting fit. Besides I was loving the skin I was in. Wearing my first 2 piece at the beach about 2 weeks ago! It was a brave moment and like the song says, I was feeling myself.

But I also had the melancholy thoughts of my money. I had began building up my savings and budgeting my finances. But when I thought about my balance, I nearly kicked myself in the face. Where did my money go? And then I got an email alert from Credit Wise as well as Credit Karma. My score was finally in the 700s. I looked at the debt I had incurred and couldn’t pay about 2-3 years ago when things got heavy and I was in between temp assignments. Nonetheless it felt good that I finally had a good credit rating. It wasn’t excellent but it was on its way.

I nearly boosted my score 200 points just by making better spending habits alone, monitoring my credit card balances and student loans. I did it the old fashion way. No consolidating or anything because up until last year, I had not clue when I would get back on my feet. This way also helped knock down some of those late payment thingies off of my report. I still have about another few years before they are all gone but the future is looking bright. I looked at my budget analysis and where I saw my money going over the next few months. The outlook is good.

That being said, we take looking ahead so seriously, we think looking back is a curse of some sorts. It’s okay to look back without dwelling. It shows your growth and gives hope towards the future. I remember not long ago wanting to move but I was so hasty about it, I nearly jumped head first into an apartment that would have definitely been an impulsive but that would have depleted my savings and landed me right back where I was before.

Nope. Not I! I worked too fuckin’ hard.

I think that’s where people run and hide…they don’t want to go in for the long haul and work hard. But if you have a vision and a goal…the sacrifice is worth it in the end!

Looking back, I am fitter financially and physically than I was before. And it feels great. I am not about to let the worst of my fears get the best of me. I am a fucking goddess!

So if you are at a brick wall, don’t turn back. Keep going! You may have to go over it, around it or even have a seat next to it and figure out a plan! But don’t give up. Remember there are 2 types of people in your corner you are doing this for: The ones counting on you to succeed and those waiting on you to fail! And in this life is where you figure out which outcome will happen!