Racism is Not Dead

The events that have unfolded not only today in Charlottesville but recently all over the country didn’t show me the harsh reality of racism, fascism, bigotry the outright phobias in this country for the 1st time. It didn’t make me disbelieve the distortion that was freedom. Why? Because the shit was never abolished with slavery or done away with marches & laws or bills that’ve been passed. They were simply hidden. The same people marching claiming to be Nazis & Klan members… those racist assholes have always been around. Their KKK hoods & robes were nicely tucked away & their Confederate flags & swatikas stashed away… All this while they either flashed a fake smile or even boldly rolled their eyes while mumbling “nigger” under their breath for the last 4-5 decades or so. 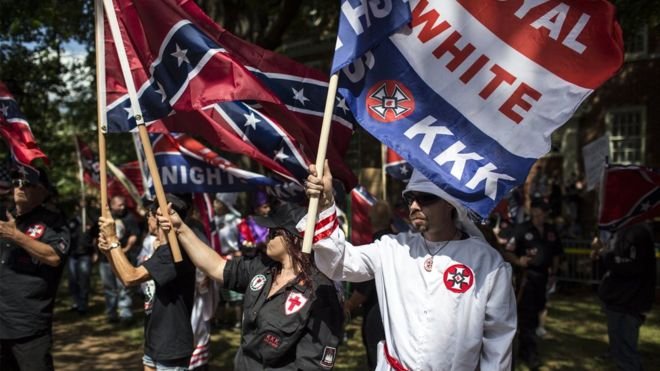 Occasionally it reared it’s ugly face as the tensions boiled & the stress of holding it in for nearly a century spewed in a beating or a random hate crime. But after all that, things would die down or we focused our distracted attention on some foolish celebrity shenanigan or reality show drama. And it was then that the fake ass peace would condition us into thinking we had overcome… Or so we thought whenever the next tragedy or hashtag occurred.

Trust me…the Matrix still had you.

That’s because under all the lies & the hype that AmeriKKKa was the Land of Free…was one simple truth: This land was stolen from Native Americans, built on the bloody backs of African slaves, later capitalized & fueled by the cheapened labor of their children’s children and that of immigrants… All of whom were deemed as less than human savages (the slave of course being the worst with our whitewashed history that we’ve been lied to about). Well we eventually called this place home too! And those who had the privilege of being White, Protestant or decendants of Europe had to share!

My skin, my hair, my culture, my heritage was always despised in desegregated schools or businesses. We were taught to hate ourselves and love their wealth! We were blinded to the truth for far too long. And now all of it is being exposed to a new generation! We weren’t just sheltered…We were disillusioned!

So what you see now, the so-called Making America Great Again is a prime example of a sleeping dragon that’s been beneath the exterior of the U.S. waiting for the right time to wake back up. Finally all that angst & racism that was taught to hide in plain site is now free to roam.

One response to “Racism is Not Dead”